A few people have asked me what I will do to help reduce anti-social behaviour and crime. I have explained to them that as a Councillor that there is little I could do, even if I got a place on the toothless Joint-Policing Committee. The biggest problem is a lack of Garda resources and that would be a matter for the Dáil and the Minister for Justice.

As a Community Activist I will continue to work away at a local level and involve myself in positive activities, such as Tidy Towns, which gives the children something to do that they can take pride in. I am also campaigning for the establishment of Social Horse Projects to be established.

Here's an interview I gave to the Irish Daily Mail in 2012 explaining the failure of the state and "regeneration" to tackle the serious problems faced by my community: Limerick After The Dundons 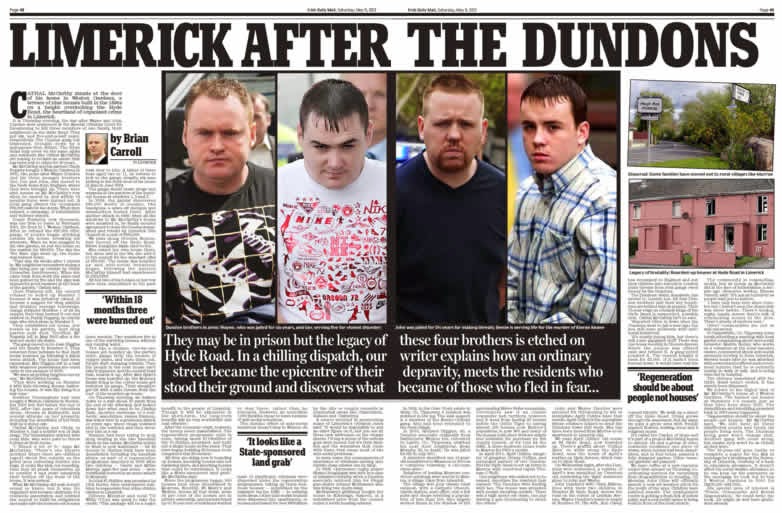 Posted by Cathal McCarthy at 10:59 AM No comments:

PARTY POLITICS, NO THANKS! 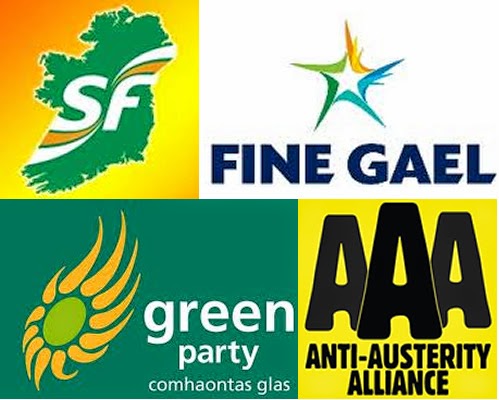 I have been active in politics for over 20-years and in that time I have been invited to join a variety of political parties; Sinn Féin, Fine Gael, The Green Party and most recently the Anti-Austerity Alliance.

The offers made to me by each of these parties varied in intensity and generosity, I'll begin with the first offer I was made.

Sinn Féin:
In 2000 I was Vice-Chair and PRO of the Irish National Congress (INC), a constitutional lobby group promoting the ideals of “freedom, unity and peace”. Mary Lou McDonald (then a member of Fianna Fáil) was the INC’s Chairperson.  Mary Lou and I were invited to attend a meeting with Party Officials to try and dissuade the INC from holding a protest against the civic endorsement of Orange Order sectarianism by Dublin City Council.  It was after this meeting that Mary Lou and I were contacted separately and invited to join Sinn Féin.  I was offered £35,000 (we still had the punt) per annum to become a Sinn Féin activist and organiser in Limerick City.

Fine Gael:
I was a candidate in the 2007 General Elections.  At the count centre in Limerick Race track I was approached by three Fine Gael City Councillors and asked if I would like to be on the Council now rather than having to take my chances in the 2009 Local Elections. I was informed that one of their party members on the Council was running for the Senate and that if successful would have to vacate their seat on the Council and that I would be co-opted on to the Council if I joined Fine Gael within the week.

The Green Party:
After the 2007 General Elections I was contacted by the Green Party candidate and asked to meet up for a chat. I invited him and his fiancée to dinner at my house; the Green Party were poised to form a coalition government with Fianna Fáil and I was hoping to make new connections and be in a position to lobby on behalf of my community regarding “regeneration” and the developers-led agenda that was emerging. I was asked to join the Green Party and be their candidate in the Limerick City South electoral area in the 2009 Local Elections. It was also inferred that my estate could be a pilot area for a home insulation scheme that would be introduced by the Green Party when in government.

Anti- Austerity Alliance:
On 25th of April 2014 I was contacted by a prominent member of the Ant-Austerity Alliance (AAA) and the Socialist Party. I was asked if I was running in the local elections and would I consider being a candidate for the AAA (the other AAA candidate for Limerick City West had dropped out for some reason) and if not would I help them canvass. I explained that I believed that Local Elections should be focused on local issues and while I was actively opposed to water charges and the property tax there was practically nothing that could be done on the Council about these issues.

Party politics has corrupted our democracy and this election seems to be driven more by personalities than it is by policies with the “opposition” parties seeking to exploit the people’s anger for their own gain. I believe that the people should determine policy, not the parties. I do not serve a political party and I never will. I have signed The Peoples Contract and if elected by the people I will serve the people.

I will be an independent voice for you and your community.

Posted by Cathal McCarthy at 6:02 AM No comments:

THE POWER OF A COUNCILLOR - THINK BEFORE YOU VOTE

There has been some talk recently that Councillors don't have any power.

Last Tuesday (13th May 2014) on  TV3's Tonight with Vincent Browne one of the topics for discussion was "Since Councillors have such little powers, should the electorate vote on national rather than local issues?"

Closer to home an anonymous blogger, "Bock the Robber", contends that Councillors don't have any practical power. Bocks' blog on the matter, "Local Elections 2014 - What powers do local Councillors have?", is quite insightful and correct up to a point.

However, there are two decision-making powers that Councillors have collectively that have been overlooked by both Browne and Bock, possibly because they both live in areas where such decisions have not affected them. These involve Part 8 planning permission and the acquisition and disposal of property or land.

Part 8 planning requires Councillors to vote on whether or not a development project should proceed and there is no leave to appeal to An Bord Pleanala for members of the public that are unhappy with the decision; the vote determines the final outcome. A good example of this is the recent application by Limerick Youth Service to build a Youth Centre in Ballananty.

This is how the Council's policy of depopulation in "regeneration" areas was facilitated. Not only did this policy show no regard for people's Constitutional right to property (turning homeowners into tenants) but it has also impacted greatly on the residents of "regeneration" areas as the houses were boarded-up and left to be looted for copper and burnt-out. While the vast majority of displaced residents are decent and law-abiding, some families that might be described as 'marginal' or 'at risk' have been displaced and are now causing problems in other estates.

The disposal of land can also impact on the quality of life for residents. The decision to close Roxboro Swimming Pool and sell the land to a developer for €10 million left the public with no amenity and there is no evidence to suggest that the sale benefited the communities affected. Another example is the sale of a section of the Peoples Park to facilitate a private development.

Councillors do have certain powers, if elected I would consult with the communities on matters that would affect them and vote in accordance with their wishes.

On May 23rd please think before you vote.


Posted by Cathal McCarthy at 8:08 AM No comments:

I have been a Community Activist for 13-years and in that I have had numerous successes in helping individuals and communities assert their rights.

The establishment of the Limerick Regeneration Agencies in 2007 saw a dramatic degeneration of the areas under their remit; things had gotten worse not better. The Agencies had a legal obligation to "...to secure - improvements in the physical environment..." and were empowered by law to spend money on things "...which appear to it to be requisite, advantageous or incidental to, or which appears to it to facilitate the performance of its functions.."

I had been calling since 2008 for the Regeneration Agency to sponsor a clean-up of the areas but was being ignored; the Public Health Inspector’s reports were also being ignored. They had the power but they wouldn't use it and our public representatives were of no help. They wouldn't listen at home so I took it to Europe to the EU Petitions Commission

On 16 April 2009 I addressed the EU Committee on Petitions at Parliament Buildings in Brussels. Photographs I had taken in March that year showing the degeneration of the four areas were beamed onto a 10-foot screen as I spoke:

My petition exposed the failure of our Council to address environmental issues in “regeneration” areas. The Irish authorities were found in breach of EU Community Law and warned that they would be fined if they failed to comply. I returned home to the news that the Regeneration Agency would sponsor a €500,000 clean-up of the areas.

Here's a video of me addressing the EU Committee on Petitions at Parliament Buildings in Brussels on 16 April 2009:


In the intervening years I have continued to highlight the failure of "regeneration" to tackle the problems of the areas it was supposed to save. I have helped individuals and other communities to lobby and campaign. Whether writing to politicians, complaints to the ombudsman, postcard campaigns to the relevant authority, engaging the media or finding a platform to highlight the issues, there is always something that can be done.

Most recently I availed of an opportunity to address the Limerick Spring Assembly, a City of Culture event held in the Crescent Hall on 12 April 2014. ‘Speaker of the House’ was TV3’s Vincent Browne and my motion that our Council should adopt a human rights based approach to community participation was passed unanimously. I informed the Assembly that this proposal had received written support from the United Nations Special Rapporteur on Extreme Poverty & Human Rights, Magdalena Sepúlveda Carmona. (learn more about the UN Support >>>) 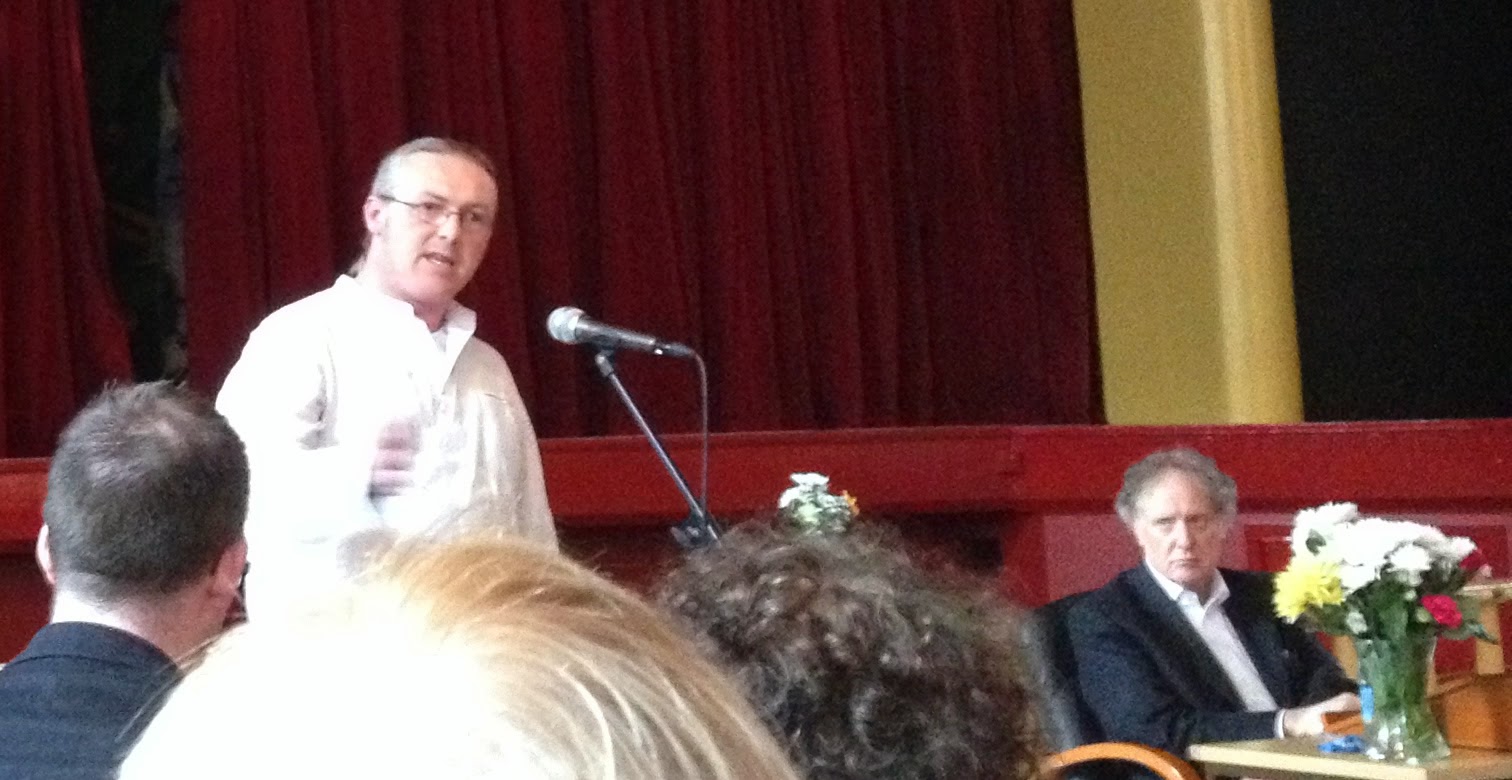 Yes, there is always something that can be done. I would be happy to assist you and your community whether or not I am elected as your Councillor – feel free to contact me if you or your community need some practical assistance and advice. (087 784 50 70)
Posted by Cathal McCarthy at 6:11 AM No comments:

I was PRO with the short-lived Concerned Residents Alliance (2008 – 2009), a city-wide alliance of residents’ associations.

I am Treasurer of Our Lady of Lourdes Community Umbrella Group and their representative on the Limerick City Community & Voluntary Forum (CVF). I represent the CVF on Limerick City Council’s Environmental Strategic Policy Committee (nominated by the BWRA and MRA). I was recently nominated by the CVF to new the Local Community Development Committee, but was not selected for membership by the City & County Manager.

Posted by Cathal McCarthy at 2:39 AM No comments: